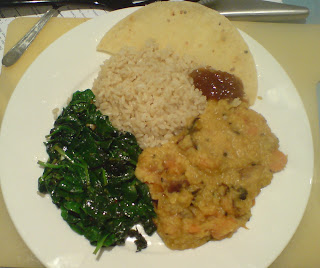 These two dishes combine beautifully to make an Indian-inspired meal. I served them with brown rice, spicy apple chutney and poppadoms.

Directions:
Place lentils, tomato, carrot and water in a large saucepan and bring to a boil.
Reduce heat to a simmer, cover, and cook until lentils are tender and have lost their shape, about 40 minutes. Stir occasionally. Begin checking that there is still water in the pot at 30 minutes and add small batches of water as needed
Make the tadka (Indian spice preparation) as follows:
Heat oil in a frying pan over high heat.
When oil begins to smoke, add cumin seeds.
After seeds have stopped sputtering, add the garlic and onion and saute over medium heat until most of the onion has turned dark brown, 5-10 minutes.
Add the coriander, turmeric, and cayenne, stir, and pour the onion/spice mixture over the dal.
Stir in the salt and serve.

Adapted from a recipe found here.

Directions:
Heat the oil in a frying pan over a medium heat. Add the mustard seeds (they should pop after contact with the oil, if they don't turn the heat up and stir the seeds until they make a popping sound) and fry for a minute. Add the garlic and cayenne, if using, and fry for a further minute. Add the spinach and stir the mixture constantly, until all the spinach has wilted. Serve.
Posted by Rachel at 09:41 1 comment:

This recipe is all over the interwebs, but in case you haven't stumbled across it before, here it is again. It's good, everyone loves it, except my boyfriend, but he has weird taste. It goes very nicely sliced in sandwices with spinach, tomato and vegan mayo. I think it would also go well in pasta dishes, but I haven't tried that yet. 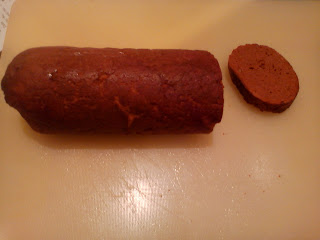 It's Christmas, so I thought I'd post a festive recipe. I prefer these to shop bought versions as they're not overly sweet. I think using a blend of wholemeal and white flour for the pastry creates a pleasant balance of lightness, texture and flavour. 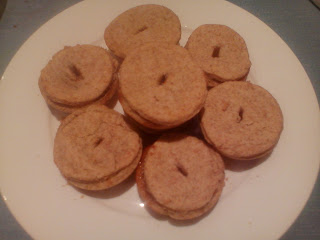 Ingredients:
200g white plain flour
200g wholemeal plain flour
200g vegan margarine
3tbsp cold water (add a little more if the pastry is too stiff)
411g jar mincemeat (you may not need all the mincemeat. Most shop bought mincemeat is vegan, but check the ingredients).

Directions:
Pre-heat the oven to 200C.
Grease a 12 hole bun tray/muffin tin with oil or margarine.
Mix the white and wholemeal flours together in a mixing bowl. Rub in the margarine until the mixture resembles breadcrumbs in texture. Add the water and gently knead into a dough.
Roll the dough out until it is approximately 3mm thick. Use a 9cm circular pastry/cookie cutter to cut out 12 circles. Line the bun tray with the pastry circles. Put two teaspoons of mincemeat in each pastry circle. Use a 6.5cm pastry cutter to cut out another 12 circles, the top the pies with them. Use a sharp knife to cut an air vent in the top of each pie.
Bake for 20 minutes. Remove the pies from the bun tray whilst they are still warm.
Posted by Rachel at 20:40 No comments:

Aubergine with Black Beans and Spinach with Fermented Tofu 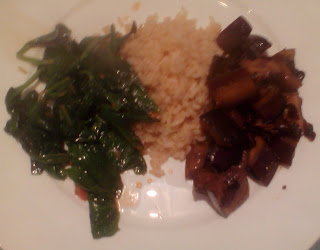 An oriental supermarket opened in my town recently, so I've trying out some new ingredients from there. Tonight I used salted black beans and fermented tofu, with delicious results.

Directions:
Heat the oil in a saucepan or wok over a high heat. Add the garlic, ginger and black beans. Stir for a minute before adding the aubergine. Cook for a further 10 minutes, or until the aubergine has softened, stirring frequently.

Directions:
Heat the oil over a high heat and add the garlic and tofu. Stir for a minute before adding the spinach. Cook, whilst stirring frequently, until the spinach has wilted.
Posted by Rachel at 12:21 No comments:

Directions:
Heat the oil in a large saucepan and add the onion. Fry over a medium heat for 5 minutes. Add the garlic, turmeric and carrot. Fry for a further 2 minutes. Add the lentils and stock and bring to the boil. Turn down the heat, cover the pan and simmer for 20-30 minutes. Blend the soup until smooth. Heat through before serving.
Posted by Rachel at 15:31 No comments: 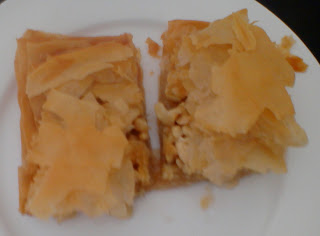 I adapted this from a recipe found on the BBC website. The original recipe can be found here.

Preheat the oven to 180C/350F/Gas 4. Grease a 17cm x 28cm (11in x 7in) baking tray with olive oil. Lay eight sheets of filo pastry, one at a time, into the tray, brushing each sheet with oil before adding the next. In a clean bowl, mix together the nuts, sugar and cardamom and spread the mixture over the pastry in the tray. Layer up the remaining sheets on top of the nut mixture, brushing each sheet with oil, as before. Using a sharp knife, cut a criss-cross pattern into the top layers of the pastry. Place baklava in the preheated oven for approximately 20 minutes, then decrease the oven temperature to 150C/300F/Gas 2 and cook for an additional half hour to 40 minutes, or until the pastry is slightly puffed and golden on top. Do not allow the top to burn. Remove and allow to cool slightly.
For the syrup, heat the sugar, water, lemon juice and orange blossom water in a small, heavy-bottomed saucepan and cook over a medium heat until the sugar has melted and a syrup is formed. (This will take about 20 minutes or so. Pour the syrup into the slits in the baklava and leave to cool. Cut into small diamond-shaped or square pieces and serve.
Posted by Rachel at 03:22 1 comment: 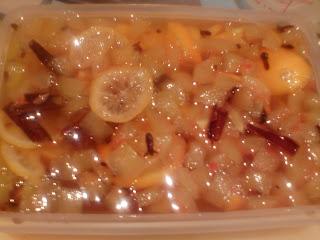 I found this recipe on Oprah's website, of all places. It's adapted from the book Vegan Soul Kitchen by Bryant Terry. It goes nicely in a salad with watercress, spinach and rocket leaves.
I made three-quarters of the amount below, as I didn't have enough rind to make the full amount.

Directions:
Prepare the watermelon rinds by removing the green skin with a peeler or utility knife. Cut away most of the red flesh with a knife, but leave a thin coat. Cut as much of the rind as possible into 1/2-inch (1cm) cubes (many of the pieces will be odd shapes) until you generate 10 cups (2.4 litres) of rind. Set aside.

In a large stockpot over medium-low heat, make a brine by combining 12 cups (2.9 litres) water with 1/4 cup (4 tbsp) sugar, salt, 2 cinnamon sticks, and 1 tablespoon cloves. Stir well until the sugar and salt are completely dissolved. Remove from heat and cool. Transfer watermelon rind to the brine. Place a small plate on top of the rinds to ensure that they are completely covered in water and don't float to the top. Soak overnight.
Drain the rinds and rinse several times with cold water.

Combine the rinds with enough cold water to just cover them in a stockpot. Bring to a boil, lower heat to medium, then simmer until the pieces are tender but still crisp, about 10 minutes. Drain and set aside.

Combine orange and lemon slices, vinegars, and remaining sugar, cinnamon sticks, and cloves with 3 cups (720ml) water in stockpot. Bring to a boil over high heat. Add the rinds, bring back to a boil, reduce heat to low, cover, and simmer for 10 minutes.
Drain the rinds, catching the liquid in a bowl, and set them aside. Add the liquid back to the stockpot, bring to a boil over high heat, and reduce until it thickens slightly, 12 to 15 minutes. Transfer syrup to a metal bowl (or saucepan); let cool.

Place syrup and rinds in a plastic covered container; store in the refrigerator for up to 2 weeks.

Original recipe taken from here.
Posted by Rachel at 13:36 No comments: